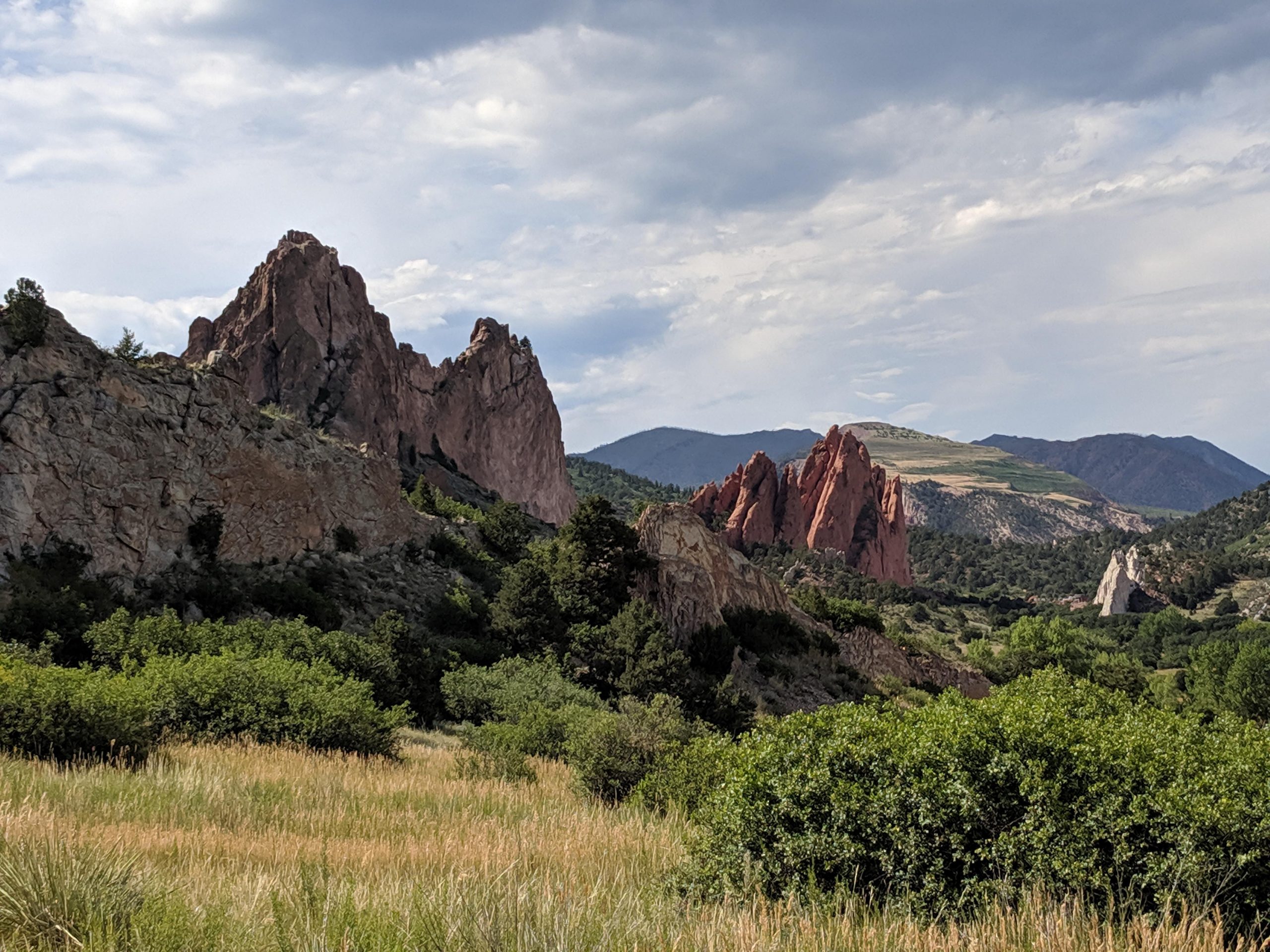 Like clockwork, the thunderstorms hit us daily at around 3pm. We’re about 5 minutes away from getting dumped on here at 8.5k feet of elevation. I’m frantically repelling to retrieve gear before the rain hits.

I’m grateful to have kept in touch with friends from former lives. My climbing partner pictured above is a friend from grad school; another father of many who, like me, is desperately (and unsuccessfully) trying to cling to his youth. I forgot to take off my $10 Casio watch and cracked it while climbing but I won’t replace it until it stops ticking. After climbing, we did a celebratory swim in the river below. Like an idiot, I broke my “ring” toe monkeying around on the pedestrian bridge by my left elbow (a misplaced heel hook on a 4″x4″ steel beam while traversing the underside of the 40 foot long bridge).

~$1k of climbing gear racked on the harness that broke the budget a couple of months back.

Colorado Springs is not an ugly place. Garden of the Gods, Pikes Peak, etc is literally in the back yard of that city (not to mention two Costco’s).

Also, Heber UT (with view of towering Mount Timpanogos) is not ugly either.

This is how we lugged all of our camping crap around the country. 6 x 17 gallon storage totes purchased at Home Depot many years ago. $127 for cargo carrier purchased 2 years ago. Pretty good setup, which effectively doubles the storage capacity of the minivan without introducing any aerodynamic drag since it’s out of the wind stream. Prior to the trip I had considered purchasing a pop-up trailer to make camping easier & more comfortable. After having survived in National Parks for almost 2 weeks in tents without incident, the pop-up trailer is definitely being scratched off the luxury-I-might-someday-buy list. $123 receiver hitch purchased at Amazon (& installed ourselves) also purchased 7 years ago. We use that cargo trailer for hauling kid kayaks & kid paddleboards all summer long. Super functional investment.

Fully loaded as we leave Glacier with a $5 Walmart tarp for rain protection. I was sitting at that picnic table when the 2-year old black bear cub tore through the adjacent campsite. Goodbye Glacier. I don’t know that I’ll see you again for a long time, but it was fun while it lasted.