I did an internship for Delta Airlines a little over 10 years ago in which I left my wife and 2 1/2 kids for 10 weeks to live with 5 single men in a filthy Atlanta home (story at the end of the post). I’ve lost touch with all but one of my former Atlanta roommates, who is (now) an Information Systems professor who follows this blog. I got this note from him yesterday:

I’ve been thinking it would be interesting to see a post from you that describes where income should come from (in order) when you retire. I guess the hierarchy would be different at different age ranges, and different income scenarios, state of residence, and would be based on today’s tax system. You could also mention how your investment portfolio might change in retirement.

My dad has been retired for a bit, and I’m sure several of your other readers will soon retire… could be interesting? Or maybe too complicated to be of any use… anyway, just an idea.

I’d been thinking about writing this exact post for years, so my friend’s email provided the requisite kick-in-the-pants to get some thoughts on “paper.”

My corollary Hierarchy of Savings post has been viewed 10,190 times and is the fifth most visited post on this site. I wrote that post in about 15 minutes. This one took a bit more thought since it’s slightly more complicated.

As people approach retirement, there will be a combination of retirement income sources and hopefully some non-zero retirement wealth.

The worst-case scenario is zero retirement wealth, zero home equity, zero pension, and only a meager Social Security income. I’m watching this scenario play out in real time before my eyes for a close family member. So far, they are keeping their head above water through the generosity of family members (e.g. their son is letting them stay in the son’s former home at a heavily subsidized rate after their prior home was foreclosed after living there for 20Y). But I worry about what happens when this generosity runs out or larger expenses arise. Without the generosity of their son, they would be in a world of hurt. This family member told me once that his retirement “plan” was “his children.” At least he was transparent about his intentions to sustain life on the charity of others….

Rant aside, here’s what a less distressed retirement ought to look like:

The challenge with retirement seems to be:

BigERN is a PhD economist (earned at the highly esteemed U of Minnesota) who has spent the better part of 4 years blogging about “safe withdrawal rates” (i.e. how much one can safely withdraw each year from their portfolio without running out of money). I’m surely oversimplifying his billion posts, but what I seem to have gleaned from them is that one can retire when the amount they require to live falls below some “safe withdrawal rate” (SWR). BigERN’s extensive analysis concludes that 4% is less safe, 3.5% is more safe, and 3% is even safer.

To make the math easy, let’s assume a 3.333% SWR and a $50k/year cost of living. That implies that a person would need a portfolio of $1.5M (=$50k/0.0333333) to sustain that standard of living for a long time. BigERN has a series of thoughtful posts on asset allocation for before and after retirement. However, I don’t recall that he’s written much about the bizarre zero interest rate environment we’re currently in (I could be wrong). No amount of Monte Carlo analysis using historical U.S. data would help us reasonably predict outcomes of today’s wonky interest rate environment.

For the purposes of this post, I’m going to assume that the retiree has done their homework and has: 1.) enough money to last them for life, and 2.) the “right” asset allocation. Consequently, I don’t have anything to add on these dimensions.

Rather, what I hope to cover in this post is how one would optimally sequence the withdrawals from their accounts to minimize their tax burden. By minimizing one’s tax burden in retirement, one can either: 1.) retire earlier with fewer assets, 2.) increase their consumption in retirement, or 3.) leave a larger inheritance to their heirs.

As an aside, I don’t seem to recall BigERN (or others) talking much about annuitizing assets. In practice, not many people annuitize their assets to transform their assets to guaranteed income streams. This lack of annuitization is known as the “annuitization puzzle” by academics and is written about here by Nobel Prize winner Richard Thaler and coauthors in the Journal of Economic Perspectives. My uninformed opinion of annuities is that they reek of opaqueness, high fees, and sleazy high-commissioned salespeople. I fully acknowledge, however, that my opinion might be unjustified….

Let’s also assume this person has no pension (as will be the case for most of us) and that the retiree is 45 years old so that Social Security is many years off. This makes the scenario more interesting in my opinion. The age could be increased to 60+ without much loss of generality. To make things interesting and the math easy, let’s assume that the distribution of assets roughly mimic my own (50% tax deferred, 25% tax exempt, 25% taxable). As an employee of a public university with access to a 401a, 403b, and a 457, I admit this is surely not a great assumption for the masses. However, it makes for a more interesting analysis than something more generic (e.g. 30% tax deferred and 70% taxable). Again, we’ll relax that assumption at the end.

Since I like bullet points, here’s where we are so far:

Here’s the foundation of what I’d do if I’m recently retired: 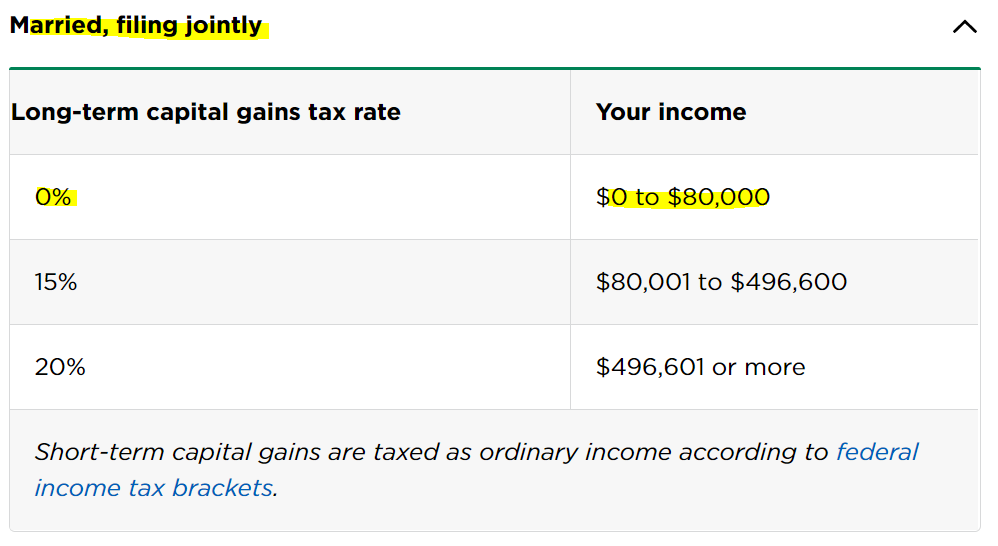 2020 LTCG table from NerdWallet (link). Highlights are mine. Not shown in this table is the fact that qualified dividends are also subject to the same taxation as LTCG. However, I’ve confirmed this through TurboTax’s software.

What are some additional considerations?

What about alternative scenarios?

The above example perfectly exemplifies tax arbitrage in retirement:

So those are my thoughts based on the current tax code. I’d be curious to see if people can poke holes in what I wrote or offer improvements.

(Yet again…..) A completely orthogonal and unnecessary trip down memory lane,

The below trip down memory lane was prompted by the email from my Atlanta buddy yesterday. If you proceed, I offer no refunds on the ensuing few minutes of your life that you will never get back.

During my MBA, I did a ten-week summer internship in Delta’s procurement department. While some of my colleagues a few cubes over were given the high-profile job of helping to procure the “best” (i.e. cheapest) mustard packets or paper luggage tags, the entirety of my internship was dedicated to supporting the RFP and eventual award of a portion of our internal shipping contracts (for when Delta needed to ship stuff internally like spare airplane parts).

Given the short-natured terms of my employment, I didn’t think it would be logistically or economically prudent to move my entire family out to be with me (I was married with 2 1/2 kids at the time). As a result, I flew out to Delta’s headquarters to live in Atlanta by myself for those 10 weeks. One perk of working for Delta was the unlimited access to free standby flights. As a result, I was able to fly back to visit my wife and kids every weekend.

Through my church network, I connected with a group of 5 dudes renting a home on the North side of town who offered to rent me a room for $300/mo. It was reasonably close (1.4 miles) to Atlanta’s MARTA rail system (specifically the “Medical Station” stop). On my day of arrival, I walked the 1.4 miles to my new home (google map link). Having spent the vast majority of my life in non-humid environments, I vastly underestimated the amount of sweat I could produce over a 1.4 mile walk in Atlanta’s summer humidity. These were the pre-Uber/Lyft days and I simply couldn’t justify the expense of a taxi when my two legs worked fine.

It was a surreal experience being transported back into a bachelor pad (essentially erasing 10 years of life progression on my end). Granted, these were church-going folks, so it’s not like there were nightly keggers or raves at our place. However, the level of upkeep of the housing arrangement left much to be desired. For example, my bedroom was located adjacent to the kitchen. At night, I would hear rats enter our cupboards and gnaw on the food. I will never forget the sound of rats chewing on dried pasta about 15 feet from my pillow. 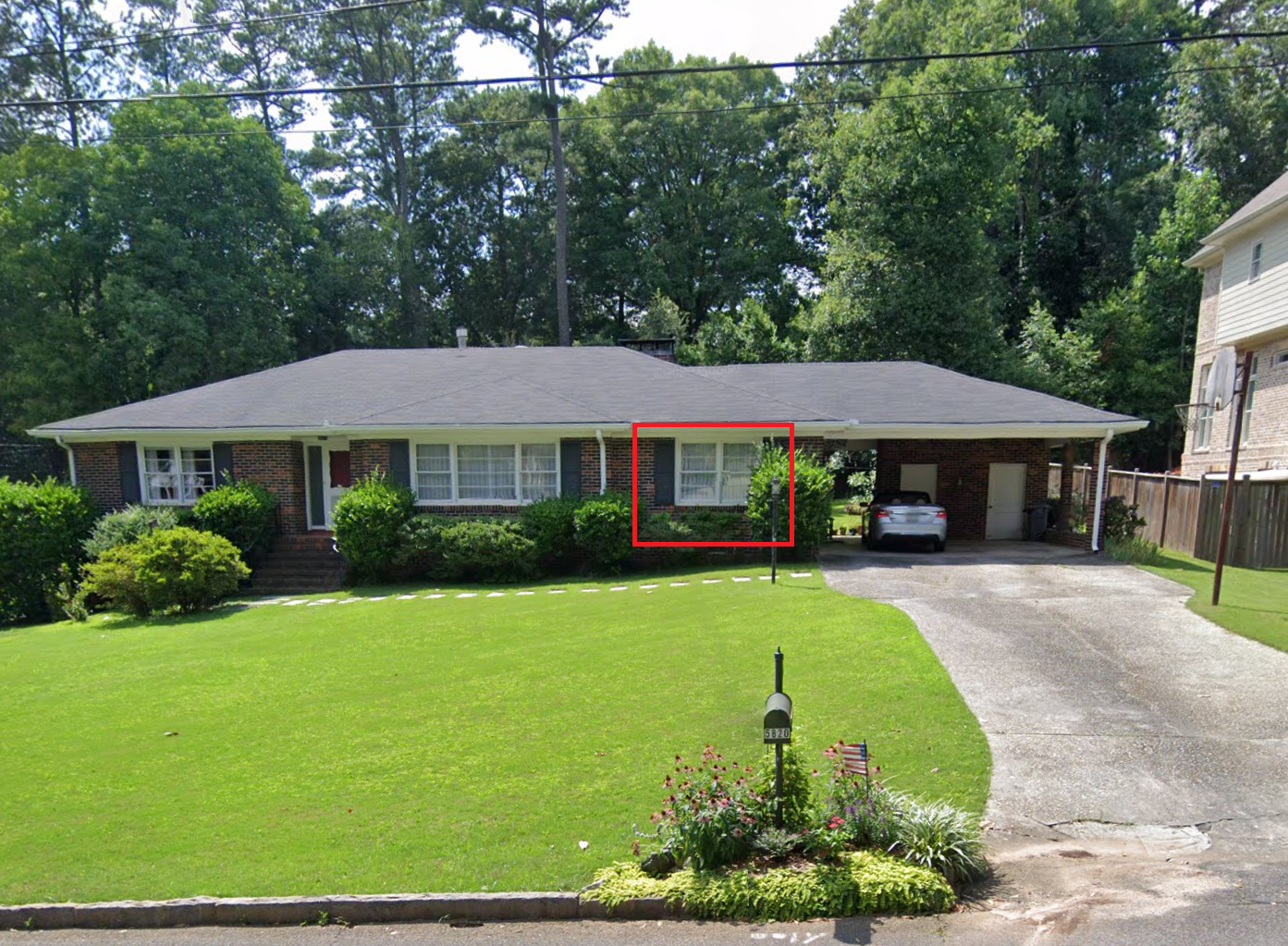 Google maps street view of the place. The red box was my room.

Another oddity of the new housing arrangement was that my roommates had somehow let the garbage service lapse a couple of weeks before my arrival with no plan to reinstate it. Consequently, I arrived to a few weeks of squalor built up in the home, much do the delight of my newfound four-legged rodent roommates.

The MARTA train would take me from the North side of Atlanta to the airport on the South side of town. From there, I would catch a 15-minute shuttle to Delta headquarters. It was 90-minutes one-way and about as fun as it sounds.

I remained car-less throughout the summer internship but I needed a better way of getting to and from the MARTA stop. To shorten my 1.4 mile commute from the house to the MARTA station, I ended up buying a bike from Walmart only to have it fall apart on me. Mercifully, there was an unclaimed bike that a former roommate had abandoned that I adopted as my own. The bike had a u-lock that was permanently attached to the frame (since nobody had the key), but I overcame it by simply taping the lock to the frame to prevent rattling and banging into my knee.

What a beauty!!!!! Unfortunately, I’d sweat quite a bit even on an easy 1.4 mile bike commute.

My least favorite memory of that summer (much worse than the rat infestation) is that 9 months after leaving the company, Delta harassed me over an alleged $885.42 overpayment mistake on their end (which I still dispute to this day). I’d already filed my taxes with the W2 they originally provided me, so they were implicitly asking me to revise my already-filed tax return. When I showed them the math of why they were wrong, the refused to budge. It was one of the more frustrating experiences of my life. Below are some screenshots of the correspondence. It is a bit cathartic sharing this completely orthogonal story of a Fortune 100 company threatening to send a former intern to collections 9-months after I left the company for a 3-figure sum. Fortunately, after weeks of battling them they “forgave” the discrepancy and stopped harassing me.

After asking for clarification on the $885.42 overpayment, Delta realized they needed to correct their correction because they’d forgotten to adjust for tax withholdings.

34 thoughts on “Hierarchy of dissavings (aka retirement withdrawal sequencing)”