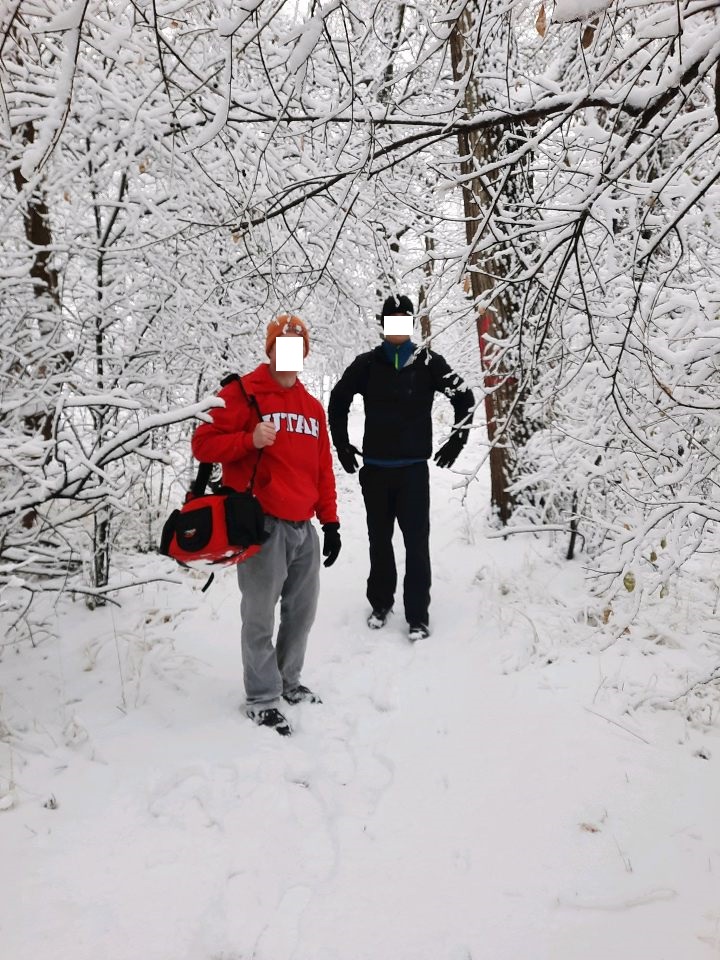 A balmy 20 something degrees.

My buddy going inverted to successfully retrieve a disc that he’d corralled to the edge of the creek using a long stick. I was desperately trying to hold on to his feet/legs, but my grip gave out. Luckily I didn’t drop him headfirst into the water.

A casual letter from our middle school principal stating that the school may have accidentally poisoned students with killer ice cream. FC2’s friend was among the affected. Despite complaining that the ice cream tasted “off”, she devoured the cone. Luckily, she survived unscathed. As if there weren’t already sufficient things to worry about in 2020, now killer ice cream is added to the list.

Some sledding fun. I froze my butt off because I underdressed and had to wait in the car. Photo credit Mrs FP.

Bike commuting in 0°F temps with wind chill. Comfortable thanks to bar mitts on bikes are of my best investments ever. Thanks to Kim (the artist formerly known as the Frugal Engineer) and Ken (from interior Alaska who often makes fun of me for complaining about the relatively mild midwest winters) for inspiration last winter. Biking in winter is pretty enjoyable. Our city does a good job of plowing the bike trails, oftentimes plowing the trails before the main roads are plowed.

A decade ago, a buddy of mine had a prankster at work photoshop the above picture of him and leave it at his desk. My (cat-less) buddy resurrected the photoshopped photo and sent it out as his family’s Christmas card this year. I thought it was pretty funny.

Playing Superhot on the kids’ new Oculus Quest 2 VR system. It’s pretty fun. Beatsaber is also a hit. I almost dove on my dog during Superhot. My daughter almost punched a hole in the TV. At least neither of us did this (link). I guess there is an entire subreddit dedicated to videos like this one called “VR to ER” (https://www.reddit.com/r/VRtoER/). Here are a few more gems (link0, link1, link2, link3, link4, link5, link6). Prior to playing the Quest I would have mocked these people. Now I sympathize with them; it’s pretty darn immersive.

Utah is not ugly. 11,752 ft Timpanogos is one of the most majestic mountains I’ve ever seen, particularly from Sundance.