The faithful reader of this blog will remember that I’m a fan of the outdoors. Wyoming, the least populated state in the country, has recently won over my heart for its beauty (at least in the summer time). 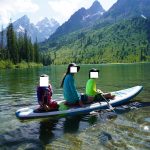 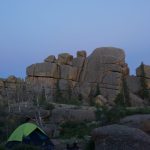 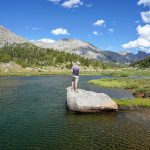 A couple of months ago I learned of a new blogger (Kim from www.TheFrugalEngineers.com) who moved from a high-tax Oregon to a very low tax Wyoming for the purposes of geo-arbitrage (both cost of living & taxes). Reading through Kim’s blog, I found her to story to be quite compelling. Luckily, she has graciously humored my request for a Q&A about Wyoming to be published here. In the following Q&A, Kim provides a compelling case for the favorable economics of living in WY.

I’ve formatted the Q&A as follows:

I feel somewhat abused by the state tax system of my current state. I have a 7% marginal rate on income, 2% of home value on property taxes, >= 7.25% on sales tax, and high car registration fees. As a former resident of Oregon, I suspect you can commiserate on many dimensions (sans the sales tax complaint). Suffice it to say that when I stumbled across your blog, I was enthralled to meet someone who had accomplished the geographic tax arbitrage that I find so mathematically appealing.

Was a 0% state income tax state a must-have for you when considering moving states? Would you have considered relocating to a state with a reasonable-ish state income tax (say Colorado with a 4.63% top marginal rate)?

One argument against obsessing about the 0% state income tax location is that, post retirement, incomes tend to be low (as opposed to pre-retirement). Thus, in retirement, property tax and sales tax should be much more important than income tax. How would you respond to this critique?

I really enjoy the blog of BigERN. A few months ago he posted a detailed analysis on his thought process on selecting a retirement destination, which I found to be fascinating. What cities made your list of potential destinations? How did you end up deciding between them?

I’m curious to hear whether you curiously considered a move to the adjacent state North of you, Washington (where I lived for 4 years and loved it).

I’ve done my fair share of obsessing about state income tax regimes, and WY consistently scores among the lowest tax regime in the entire country. I’ve also done my fair share of travelling across WY. I find the I-80 corridor to be a bit desolate (no offense!), though the Western side of the state is quite dramatic (Star Valley, Jackson). I understand that Jackson is prohibitively expensive, but were there other parts of the state that intrigued you?

How do you live without a Costco (joking…not joking)?

In your retired life, what is the annual non-tax cost-of-living savings by living in WY, as opposed to OR?

Pre-retirement, did you strategically shove more money into tax-deferred vehicles (trad 401k, trad IRA, etc) knowing that you’d relocate to a no-tax state in the future?

I’m unsure of where we’ll end up in retirement, but I’m almost positive that the marginal rate will be less than 7%. Therefore, there is a very clear state-tax-arbitrage incentive to shove money in (aside from the obvious federal tax arbitrage a-la-Go-Curry-Cracker).

Are you implementing Roth Conversions? If so, how much are you converting per year? How did you decide on what the appropriate amount to convert is (just the standard deduction, up to the 10% bracket, up to the 12% bracket, etc)?

What are you doing for health insurance? ACA? What has been your experience thus far? What is the size of the subsidy? Does size of your Roth conversion interact with the ACA subsidy?

How did your extended family and friends react when you told them you were moving to WY? Has anyone been out to visit you?

What airport do you use? I’m assuming Denver (2.5 hours away by car)?

Give me your best sales pitch for WY as opposed to other tax-friendly states (NV, TX, TN, WA, SD, etc).

As I understand it, you have yet to experience a WY winter. Having spent the past 8 years in the Midwest, I can testify of the horror of a Midwest winter (though perhaps the horror is more poignant because I choose to bike commute year round). I suspect a WY winter will be similarly horrible. What gave you the confidence to embrace the WY winter while presumably never having experienced one?

How long do you expect to live in WY?

Is there any college arbitrage that your kid can pull off as a WY resident? Somewhere I thought I’d heard that WY residents are entitled to free tuition at University of WY, though my memory may indeed be failing me. Aside from that potential arbitrage, are you aware of any affirmative-action type measures that out-of-state schools would employ that would work in your favor (in an effort to obtain a better geographic representation, does this place WY students at an advantage for probability of admittance and/or increased scholarships)?

Have you made it to the Wind Rivers yet? If not, any plans to do so?

I’ve dreamed about an eventual move to WY for years now but haven’t yet convinced myself to pull the trigger. The Star Valley area looked beautiful (I drove through it this summer, like much of WY, in our National Parks tour), but is super isolated. The I-80 corridor looks less isolated but flatter than I’d like. But the economics of moving to WY are hard to refute. As of today, I’d consider retiring to WA, ID, NV, WY, UT, or CO. I’m still trying to narrow it down, which is why I wanted to pick your brain so much.

Are there any posts you’ve written that you think that readers of this blog should read?

A huge thanks to Kim for humoring my barrage of questions and enlightening me to the wonderful world of living in Wyoming!!!!!! To follow her journey, visit her site: www.TheFrugalEngineers.com.