Since I don’t have anything wise or profound to say about the pandemic, how about another (trivial?) money saving post? Nothing like documenting how to save a hundred (or more) dollars a month to ease the pain of huge investment losses and 20% unemployment…

I first blogged about my cell phone strategy about 3 years ago in this post: https://frugalprofessor.com/phones/. Coincidentally, David at OchoSinCoche wrote about his similar setup in this post today.

Since writing that post (and the decade prior), I had adhered to the following recipe to get ***almost*** free phone (cell & landline) service:

In recent months, however, I’ve slightly changed the strategy.

As you can see, the only thing that changed is bullet point 2.

Even though I have joined the rest of the world with a “real phone plan”, I still use my GV number as my primary number. I still use GV constantly. I love having the option to text on a PC (I loathe texting on a phone; when I get a text, I sit down on a computer to compose the reply). And I love the voicemail transcription, spam filters, etc. I still use my landline through this device because it’s simple and good enough quality. I still turn off data because it’s almost completely unnecessary. I remain perplexed by people’s obsession with “needing” data.

What’s the deal with Xfinity Mobile?

I’d read about the introduction of this service a few years back. I didn’t get too excited about it at the time because:

I have to say that I’m pretty impressed.

The good of Xfinity mobile:

The bad of Xfinity mobile:

If you (or an extended family member) have Xfinity, I can’t think of a good reason to not sign up for Xfinity mobile. The only reason to not do so is if you find the $12/month + taxes fee offensive for up to 5 lines. In which case, you’d be better off with a $1/month prepaid plan through Tello like I’ve done for years.

You can activate in an Xfinity store or online. If you do so online they send you a sim card via mail.

Screenshots for the curious: 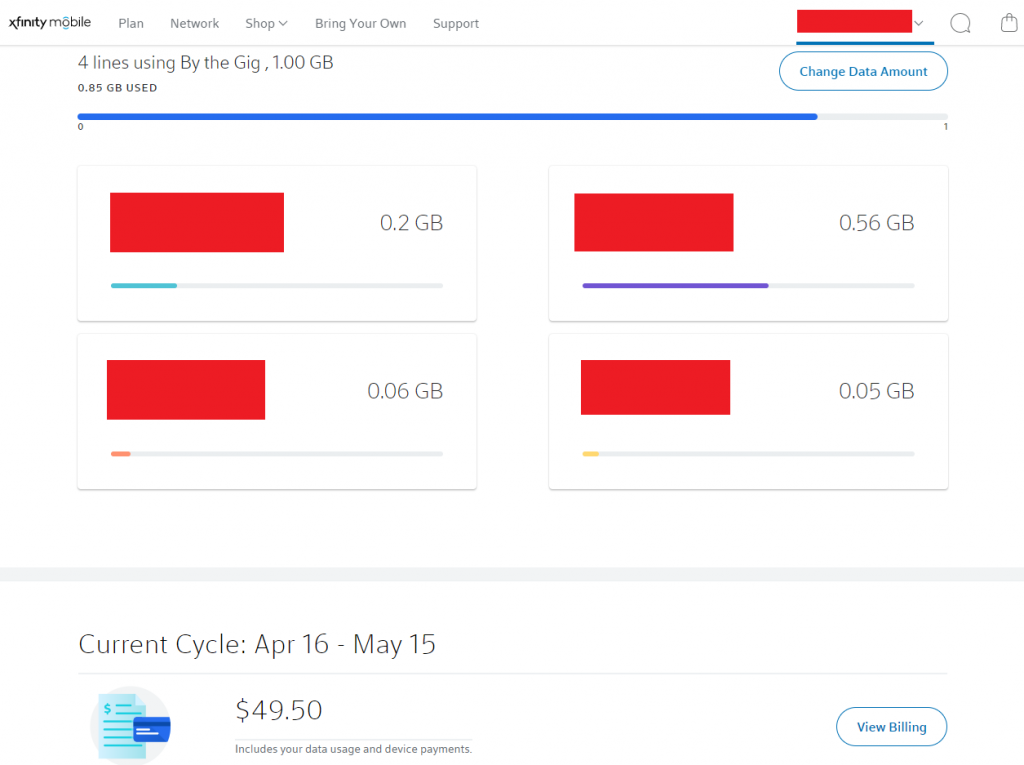 Billing cycle ends today. The 4 of us used less than a gig. Mrs FP and I jointly used 0.11GB, which is about 10X what I’m used to consuming in a given month. If I’m not mistaken, we were researching whether we should purchase fruit trees after seeing them at a Costco. These random internet queries at Costco constitute 95% of my typical data usage. I remain unsure why Costco doesn’t give us wifi like pretty much any other (inferior) retailer I can think of. 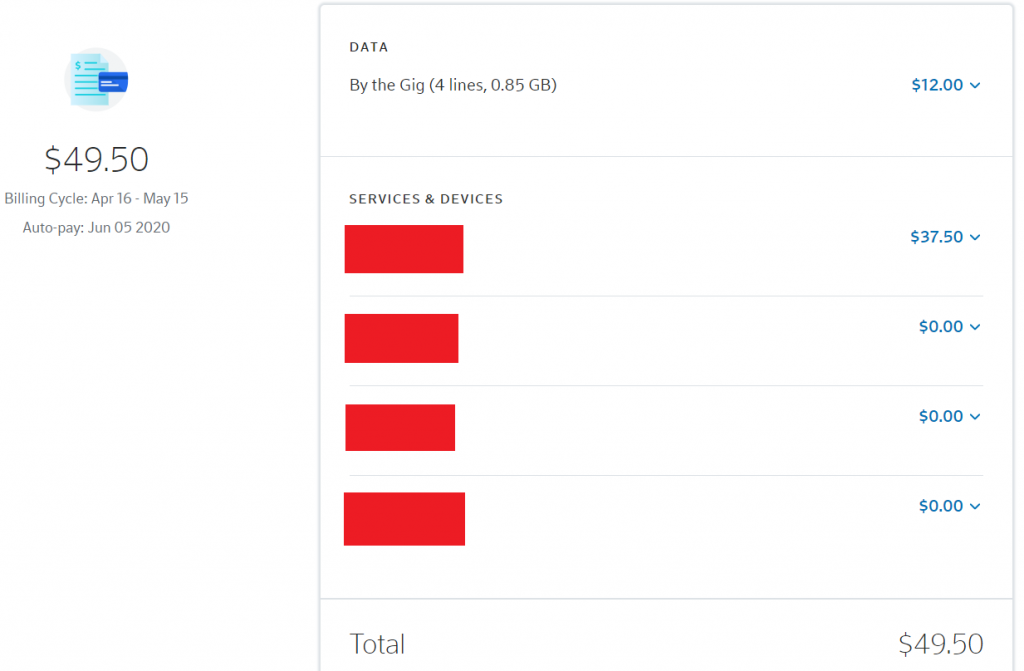 Without the iphone purchase, the monthly bill for the 4 of us is $12 (pre tax). With the purchase of a new iphone (extended family member), it works out to $49.50.

Digging into the $37.50 charge, it reflects a 22% discount off the face value of the iphone. Not too shabby.

911 fees seem fairly reasonable???? It’s been 17 years since I had a “real” cell phone plan, but I seem to recall them being higher than $1/person.

During the summer of 2003, between semesters at college, I took a job as a door-to-door salesman with a buddy from college. I sold Dish Network TV services in Indianapolis, IN.

Upon accepting the job, my manager walked us recruits to a t-mobile retailer and I picked out a Nokia 3310 and signed a 1-year contract like an idiot. I think I agreed to pay $40/month for the phone for a 500 min/month plan. One month I unknowingly exceeded my minutes and incurred $150 of overage fees. I think I wept when I found out.

The phone was beautifully ugly. The thing was notorious for slipping out of my pocket, so I bought a holster for it. If I stored the phone on the outside of my waistband, it would get caught on things and crash to the ground. So naturally I stored the phone on the inside of my waistband, which is how the phone earned its nickname “Crotch Phone.” I have a lot of good memories with that phone. Since Mrs FP and I are of the most socially awkward people on the planet, it is through text messages on this phone in which our courtship came to be and eventually turned into 15 years of marital bliss and almost a half dozen children. All because of “Crotch Phone.”

There were probably about 6 of us salespeople in our little door-to-door sales operation and we shared an apartment in Indianapolis. Since I was attending undergrad in the Mountain West, the job entailed moving across the country to the foreign landscape of the Midwest (a foreshadowing of my future life). Most of us salespeople didn’t own cars. Rather, we snagged a ride with our sales manager who would dump us off in random neighborhoods in the afternoon and pick us up in the evening after knocking doors for 6 hours. We would repeat the process daily for three months, making around $125 in commission per sale.

If you want to learn humility, I’d recommend a job as a door to door salesman. My most lasting memories from that summer:

A Wikipedia image of my first cell phone; the Nokia 3310. She was a beauty; same color as above. I loved the “snake” game that came installed on it. I wasted many hours of my life on that game.

In my Dish Network uniform staking out my territory.

The only photo I posses of “Crotch Phone” in the wild, before the era of us taking 100 pictures of ourselves (and our meals) per day. Also showcased is my life philosophy: take advantage of public bathroom amenities whenever available. This is in Victoria BC in the era of the 2005 Boeing internship (crotch phone still going strong 2 years later!).

In going down memory lane I found this gem of a picture illustrating the squalor I lived in during undergrad with 5 other dudes (who remain lifelong friends). Favorite parts of this photo: 1.) Now extinct $11.99 Court Classic shoes from Costco; I came out of the womb a Costco fanatic….well before I procreated a million times. 2.) I purchased that hat at a thrift shop. It’s a picture of a baby with the words “Grandpa’s #1 Grandson.” The irony of a grandfather giving that custom-made hat to Goodwill and the fact that Goodwill deemed this hat re-sellable will always bring a smile to my face.